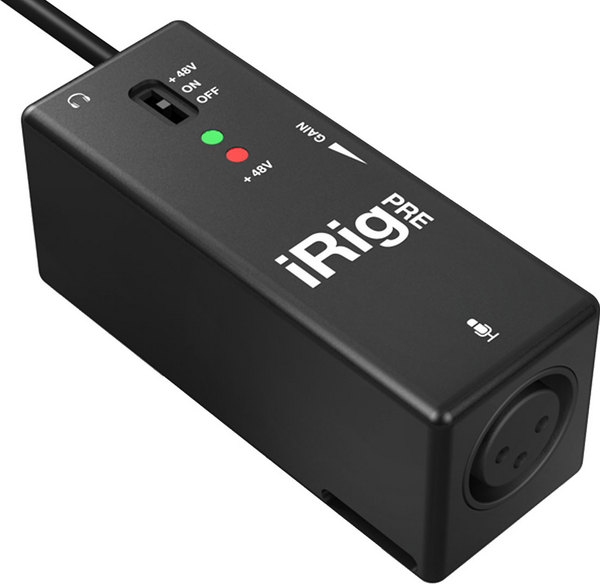 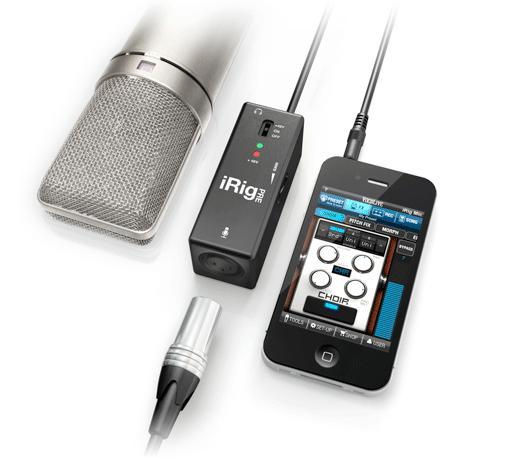 Your go-to mic to go Here's how you use it: Take the microphone you use every day on stage or in the studio and plug it into your iOS device. It's that simple. Need Phantom Power? Flip the "Phantom Power" switch. Congratulations, you've just become a professional user.

This is perhaps the most important product introduction for musicians and the rest of the civilized world since the iPod and iPad. Now, thanks to the iRig Pre, you can hook your favorite microphone to your iOS device and join the mobile music revolution. Create music any time, anywhere with your own high quality microphones on your iPhone, iPod touch or iPad.

So now if you want to record that special riff using your own ribbon microphone and mix it on your iPhone, you can. Simply plug the iRig Pre into the headphone jack of your iOS device, activate phantom power if necessary, launch your recording software and wail away.

Hey, is that a Preamp in your pocket?

Why yes, as a matter of fact it is! The iRig PRE sports an ultra-compact design so it fits pretty much anywhere. Just slightly larger than a 9 volt battery, you'll be amazed at how quickly you'll misplace your iRig PRE. But don't let the small size fool you. iRig Pre is a professional sounding mic preamp that will dazzle you and your friends.

Phantom of the iPad The iRig Pre has a 48v Phantom Power feature that lets you use your favorite condenser microphone with your iOS device. But don't worry the phantom doesn't eat your device battery, it takes a standard 9v. No longer are you shackled by the chains of passive microphones for your mobile recordings. Now inject the shocking awe-inspiring power and clarity of the ever popular Condenser microphone into the lifeless muddy world of "a.m. radio" sounding recordings. You'll be the hero of the entire civilized recording world when you unleash the beast onto unsuspecting virgin ears, now thanks to the technological marvel that will become known to the rest of the world as iRig Pre, but you saw it here first.

Oh, and you can plug a SM58 into it and sound like your fabulous normal self as well. Cool.

Hear Yourself over the Drums

The iRig Mic Pre features a 3.5mm headphone out that allows you to monitor the processed sound however you sound. So now you can finally tell if you're "Idol" material. Unlike some other mic cable companies, we provide you with an astonishing 40cm (that's like 15.75") of space to place your device. So if you want to Velcro your iRig Pre to your mic stand and use the iKlip Mini to hold your iPhone, you can. And with total peace of mind. Rest assured, you're secured. However, if you Velcro it to the singer's pants, you're on your own. Sorry, that voids the warranty.