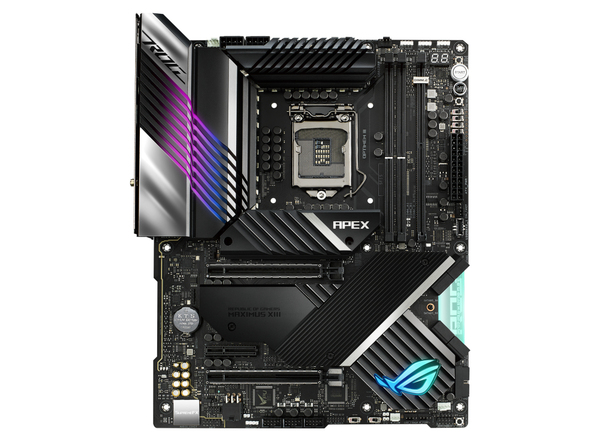 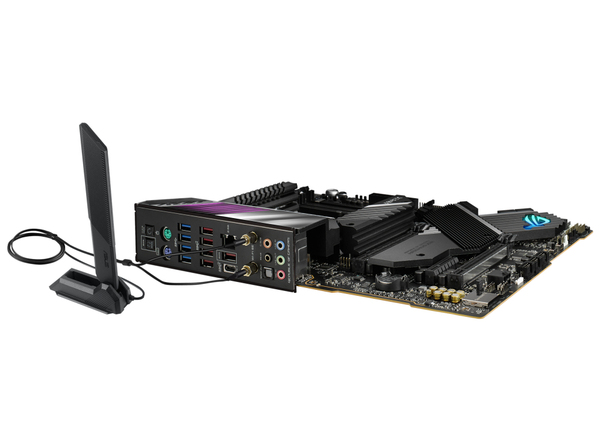 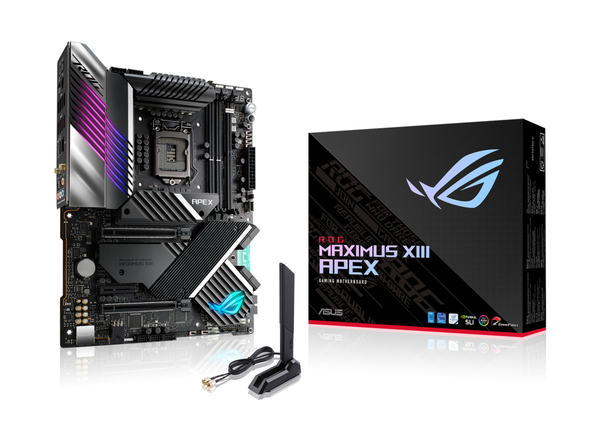 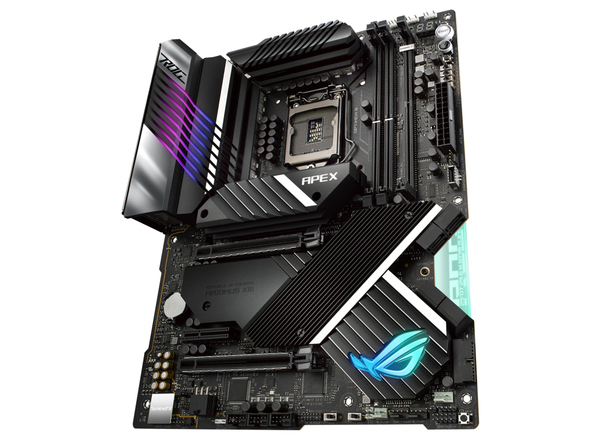 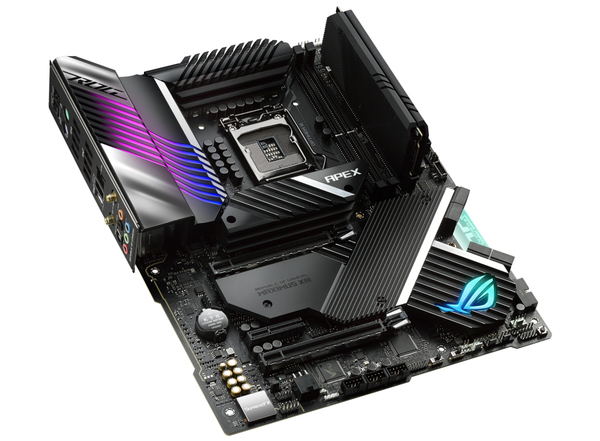 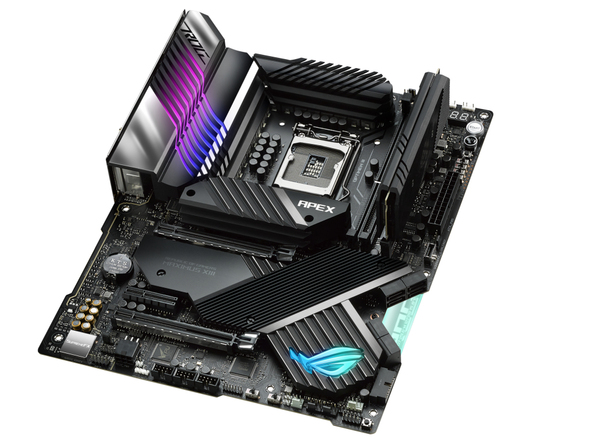 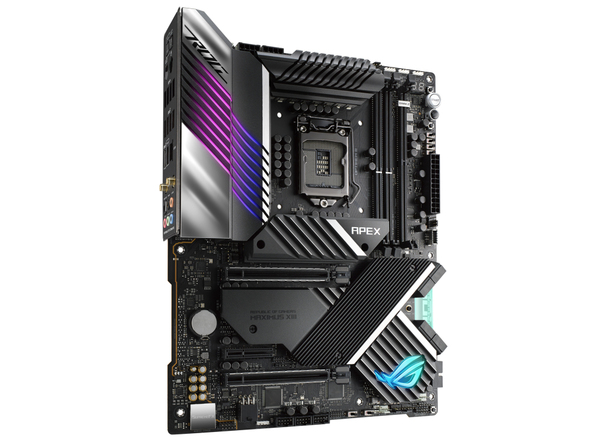 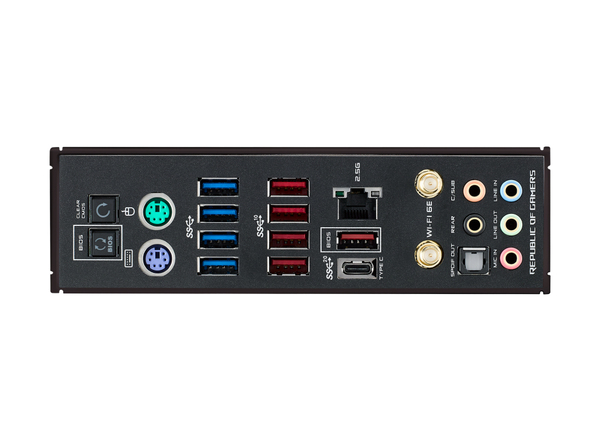 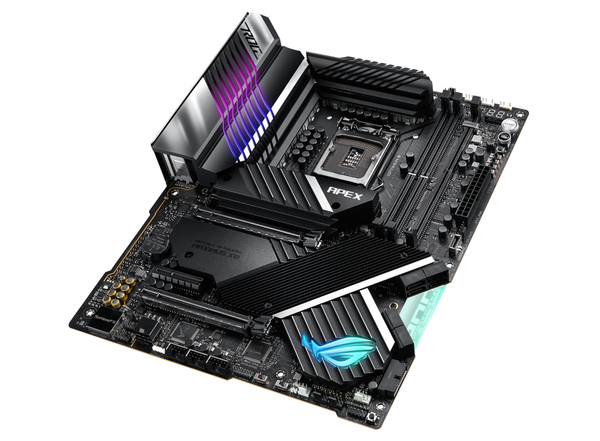 I Overclocking
Tuning is now faster and smarter than ever before. ASUS AI Overclocking profiles the CPU and cooling to predict the optimal configuration and push each system to its limits.

AI Cooling
Balance the thermals and acoustics of any build with a single click. A proprietary ASUS algorithm reduces unnecessary system noise by monitoring CPU temperatures and dynamically adjusting fans to optimal speeds.

FLEXKEY
FlexyKey allows you to redefine the role of the chassis reset button. Assignable options include quick Aura lighting control, booting directly into UEFI, or performing a safe boot to recover settings.

V-LATCH SWITCH
Makes tuning more intuitive by recording both the true highest and lowest core voltage and then passing the data to HWiNFO and AI Suite 3.

Q-CONNECTOR
Sorts all front-panel cables for a neater set-up.

OVERCLOCKING
ROG Maximus XIII Apex makes overclocking accessible to both beginners and seasoned enthusiasts alike. Its intelligent power solution caters to the demands of the latest Intel processors, while comprehensive controls give you the tools you need to ramp up performance.

Slow Mode Switch
Instantly reduces the CPU ratio to 8X to keep the system stable during setup for extreme overclocking.

Condensation Detection
Specialized circuitry allows Maximus XIII Apex to detect when condensation occurs on the back of the board. Divided into three distinct sections — CPU, DRAM and PCIe — the feature provides a useful warning when an area may be at risk of short-circuiting.

CPU LED
Flashes when condensation is detected near the CPU

DRAM LED
Flashes when condensation is detected near the DRAM

PCIe LED
Flashes when condensation is detected near the PCIe

A Brief History
ASUS became the first manufacturer to implement phase doublers when we shipped the A8N32-SLI Deluxe back in 2005. The board’s VRM was lauded for elegantly overcoming the power handling capabilities of components that were available at the time while also reducing voltage ripple. Those benefits lead to phase doublers becoming universally accepted in the industry, and they are still used for similar purposes today.

A Shift in CPU Demands
Today’s CPUs pack more cores than their predecessors, and the latest instruction sets allow them to crunch computationally dense workloads at an incredible pace. As an added bonus, these processors also consume less power at idle and can transition between loads states much more quickly. These improvements necessitated a re-evaluation of power design priorities, because phase doublers add a propagation delay that hampers transient response.

Bucking the Trend
The latest integrated power components can handle higher currents than the devices of yesteryear, making it possible to implement a simple circuit topology that isn’t hamstrung by the processing lag of phase doublers. That’s why the ROG Maximus XIII Apex utilizes teamed power stages to deliver higher burst current per phase, while maintaining the thermal performance of phase-doubled designs.

COOLING
A robust and comprehensive cooling solution is vital in your pursuit of performance. ROG Maximus XIII Apex includes sturdy heatsinks and a series of fan and water-cooling headers to keep temperatures in check.

Cooling Heatsinks
VRM and Aluminum I/O Heatsink
A VRM heatsink on the MOSFETs and chokes is connected to the aluminum I/O cover via an embedded heatpipe to increase mass and surface area for dissipation.

Extended VRM & M.2 Heatsink
The extended heatsink helps further cool the VRM and an M.2 drive mounted in the primary onboard slot.

U-Shaped Heatpipe
The heatpipe efficiently distributes the thermal load across the entire array.

M.2 Backplates
The two onboard M.2 slots feature backplate blocks to help cool high-performance drives, even when airflow is restricted.

Chipset Heatsink
A dedicated heatsink draws heat away from the chipset to maintain optimum operating temperatures.

Multiple Temperature Sources
Each header can be set to monitor and react to three user-configurable thermal sensors for workload-based cooling, and all settings can be easily managed by Fan Xpert 4 or via the UEFI.

ROG Water-Cooling Zone
Dual water-temperature headers and a flow-rate header feed information straight into the AI Suite utility, allowing you to track coolant temperatures and the flow rate of the entire loop.

Water Pump+
A dedicated header can supply over 3 amps to a high-performance PWM or to DC water pumps.

Water In/Out
A dedicated header enables monitoring of temperatures at the input/output points of any component.

Intel® WiFi 6E (Gig+)
Onboard WiFi 6E technology takes advantage of the newly available radio spectrum in the 6 GHz band, providing up to three times the bandwidth of the 5 GHz band and up to seven 160 MHz bands to deliver ultrafast wireless networking speeds along with improved capacity and better performance in dense wireless environments.

WiFi 6E Antenna
The antenna has two built-in transmitters and receivers to enable faster transmission speeds, and it supports the 2.4, 5 and 6 GHz bands.

Magnetic Base
A powerful magnetic base secures the antenna on the top or side of the PC case.

USB 3.2 Gen 2x2
A USB 3.2 Gen 2x2 Type-C® port at the rear and an additional front panel header onboard provide data transfer speeds of up to 20 Gbps for the latest devices.

PCIe 4.0-Ready
ROG Maximus XIII Apex is equipped with four onboard M.2 slots, with two offering PCIe 4.0 support for the latest GPUs and high-speed SSDs. To cope with the heat generated by high-performance M.2 SSDs, each drive is protected by a dedicated M.2 heatsink and an embedded backplate.

ROG DIMM.2
The ROG DIMM.2 module is an innovative expansion card that allows two M.2 drives to be connected via a DDR4 interface. You can then add metal heatsinks, helping to control thermals for maximum performance while elevating the aesthetics.

ROG SupremeFX
ROG SupremeFX is a unique blend of hardware and software that provides superior audio. In Maximus III Apex, SupremeFX utilizes the ALC4080 codec to increase playback resolution across all channels. The front-panel output is streamed through an integrated Savitech amplifier that’s capable of driving a wide range of gaming headsets and high-fidelity headphones.

ALC 4080 Codec
The ALC4080 codec improves playback audio resolution from 192 kHz to 384 kHz across all channels.

Switching MOSFETS
A unique design allows the codec's impedance-sensing function to be ported with either the front or rear headphone outputs.

OPTIMIZATION
ROG Maximus XIII Apex is packed with intuitive and flexible tools that give you complete control of system performance.

Level Up Performance
The dashboard-style control panel of AI Suite 3 lets you fine-tune almost every aspect of your ROG Maximus XIII Apex system with ease. Get the best balance between performance, cooling, stability, and efficiency via one simple and intuitive interface.

UEFI BIOS
The renowned ROG UEFI (BIOS) provides everything you need to configure, tweak, and tune your rig. It offers intelligently simplified options for newcomers to PC DIY, as well as more comprehensive features for seasoned veterans.

Accurate Voltage Monitoring
Conventional motherboards use single-ended sensing circuits that are susceptible to noise and have to tap voltage rails from a location that isn’t ideal for accurate monitoring. These issues lead to a large disparity between the voltage fed to components and the values reported to software. Maximus XIII Apex features a differential-sensing circuit that rejects noise and takes readings directly from the CPU and the end point of major voltage rails. This simplifies overclocking and tuning by allowing you to track voltages more accurately.

Grow Your Gaming World with Aura Sync
Up your game with complementary Aura Sync enhanced aesthetics, featuring preset lighting effects that can be easily synchronized across compatible ROG graphics cards, monitors, mice and keyboards to give your setup a unified look.

Addressable Gen 2 RGB Header
The addressable Gen 2 RGB headers can be controlled with Aura software, which automatically tailors your preferred lighting effects to the number of LEDs present in the connected gear or strip. The new headers also offer backward-compatibility with existing Aura RGB components.

Sonic Studio III
Sonic Studio supports HRTF-based (head-related transfer function) virtual surround for headsets, casting an immersive aural landscape that draws you deeper into the action. The intuitive Sonic Studio interface also offers a range of EQ options and one-click presets, allowing you to tailor acoustics to suit personal preferences or the characteristics of your headset.

DTS : Sound Unbound
ROG Maximus XIII Apex includes a pre-loaded DTS Sound Unbound app that envelops you in audio as never before, conjuring whole new levels of immersion for extraordinary gaming and entertainment experiences. By exploiting Windows Sonic spatial technology, DTS Sound Unbound delivers audio in a virtual 3D space — putting you right in the middle of the soundscape, where you can sense the location and direction of every gunshot, footstep or other sound in your virtual environment.

Armoury Crate
Armoury Crate is a software utility designed to provide centralized control of supported ROG gaming products. From a single intuitive interface, Armoury Crate puts command of all your Aura gear at your fingertips with the new Aura Creator suite ready. The software also provides control of settings for a growing number of ROG products, making it easier to tune the look and feel of your system. Armoury Crate even offers dedicated product registration and ROG news feeds to help you stay in touch with the ROG gaming community.