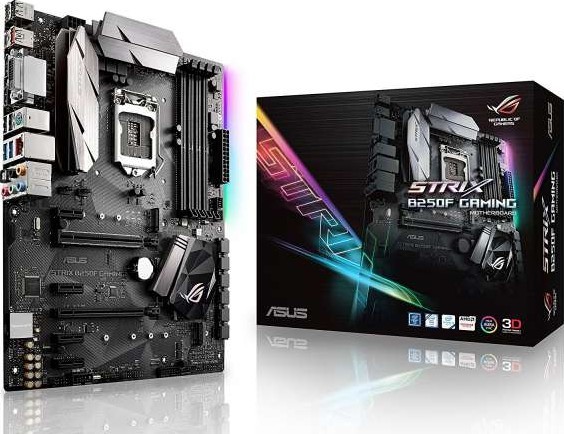 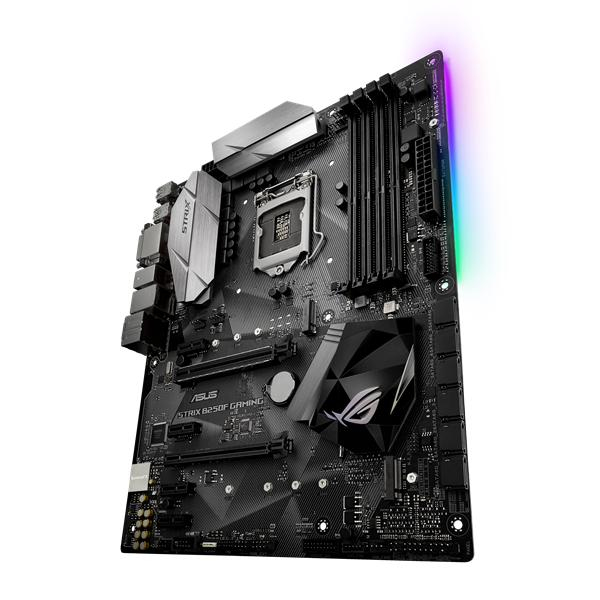 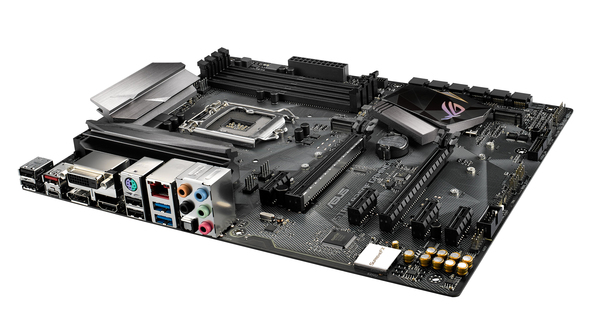 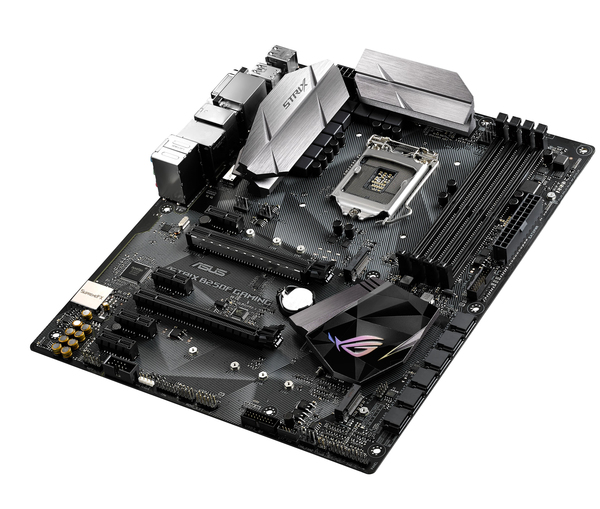 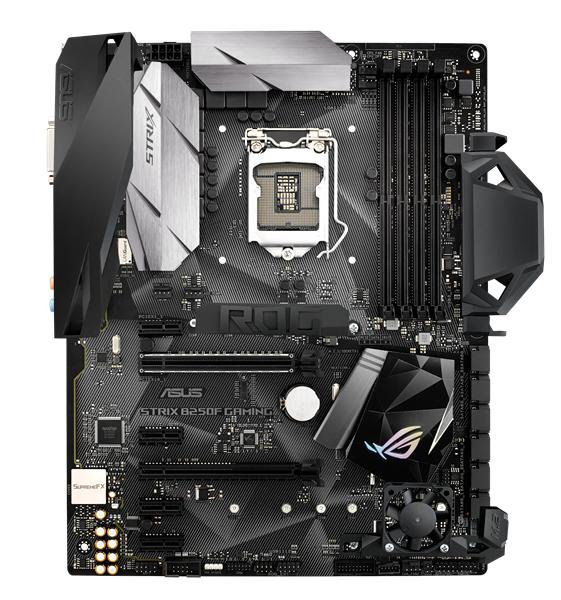 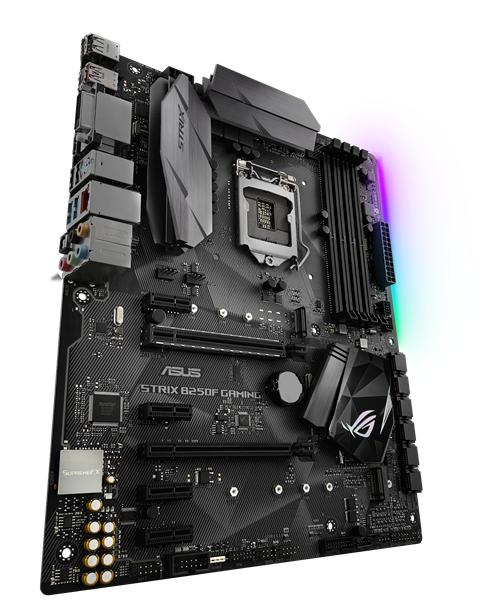 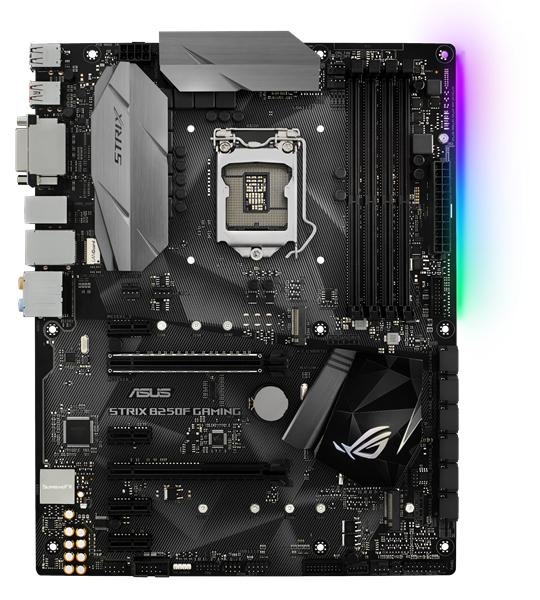 -
Product is end of life or currently not available. Please contact our customer service for more information regarding this product.
Specifications
Description
Availability / Delivery
Price development

Create your own custom LED lighting effects with the intuitive Aura software. Cast a stunning multi-color glow across your build with the powerful RGB LEDs built in to ROG Strix B250F Gaming, or attach a separate RGB strip using the onboard 4-pin header. Fire up Aura and enjoy the creative freedom of twelve different lighting themes.

3D Printing Friendly
MAKE IT YOUR OWN
ASUS is the first motherboard manufacturer to support 3D printing, making it easy to customize your motherboard's appearance and improve system performance with a range of printable parts.

3D-PRINTABLE ACCESSORIES
As system parts are visible in custom PC builds, make yours stand out from the competition with 3D-printed accessories.

FAN GRILL
Add a little extra style to your build.

ROG FONTS
Use ROG font files to print letters -- then fully customize your build by adding your name or any other word or phrase!

ROG KEYCHAIN
Print a 3D keychain and show your ROG passion to the world!

AUDIO
SUPREMEFX
SHIELDED AUDIO, SUPERIOR SOUND
ROG Strix's awesome SupremeFX audio technology has levelled up, delivering an exceptional 113 dB signal-to-noise ratio on the line-in connection for best-ever ROG recording quality! We've also added a low-dropout regulator for cleaner power delivery to the SupremeFX S1220A codec, plus Texas Instruments® RC4580 and OPA1688 op-amps for high gain with low distortion. It all adds up to audio that envelops you as never before!

SONIC STUDIO III
ROG Strix's Sonic Studio III audio-effects station has an intelligent routing feature made for streaming. The new routing feature ports streams to different outputs giving you full control over who hears what. With Sonic Studio III, you now can share your exciting in-game moments without worrying about frivolous DCMA takedown requests. In addition to that, Sonic Studio III also comes with app-level preferences for instant audio profiles, and improved noise filtering for conversations with total clarity!
Easily assign different audio streams to different outputs, such as browser audio to headphones and game audio to speakers.

APP-SPECIFIC PROFILES
Apply customized audio settings to different applications, so everything you do is perfectly tuned to the way you want to listen.

SCAN AND DETECT TO DOMINATE
SONIC RADAR III
We've given Sonic Radar III an overhaul, evolving the audio engine to process sounds more accurately than ever, ensuring you're always aware of what's going on around you — and we've even added an onscreen arrow to help you pinpoint the enemy's position instantly! See the origin of key in-game sounds and hone your enemy-pinpointing skills. Plus the new audio boost feature provides filters that let you hear even the faintest sounds, so you can become the hunter, not the hunted!

ALL-ROUND ENERGY EFFICIENCY
With the Energy Processing Unit (EPU) you'll enjoy real-time, system-wide power savings — for gaming kicks that won't cost the earth! EPU automatically detects and adjusts power consumption according to your rig's needs, so you save money without compromising on thrills. EPU will also reduce CPU wattage to a set level and deliver even more savings with Away mode, creating an extreme energy-saving scenario that shuts down unused extra I/O controllers and reduces the power level of the graphics card. That means full power for your gameplay — and then total energy efficiency when you step away!

COOLER BY DESIGN
Play quieter and cooler with advanced fan and water-pump controls for the ultimate in undisturbed gaming. With onboard thermal sensors and hardware-level 4-pin/3-pin PWM/DC mode detection, Fan Xpert 4 makes sure every fan achieves the best balance of high cooling performance and low noise -- so you enjoy all the performance you demand with none of the racket!

GAME FASTER, RANK HIGHER
ASUS Turbo App is the intuitive tuning panel to boost everything to secure your victory in your favorite titles! Prioritize data across your network and optimize the audio settings for fantastically clear audio and in-game-chat. History is written by the victors, so don't go to war without Turbo App.

RAMCACHE II
SPEED YOUR GAME LOADS
Uniquely intelligent technology that effectively caches an entire storage device so that favorite games and apps launch at breakneck speeds, getting to work the moment it's activated. RAMCache II turns milliseconds into microseconds to boost game-load times -- and of course it's compatible with the latest NVM Express storage options!

AWARD-WINNING BIOS DESIGN
The smoothest, slickest mouse-controlled graphical BIOS has been improved to make it even more appealing. Whether you're a PC novice or a seasoned overclocker, the EZ and Advanced Modes help you find your way. In EZ Mode you can get set up very quickly, applying the date and time, fan profiles and Intel Extreme Memory Profile (XMP) memory profiles. Switch to Advanced Mode to set up favorites and shortcuts, record and review recent changes with Last Modified or make notes in Quick Notes.

CRASHFREE BIOS 3
Never again worry about corrupted BIOS, as CrashFree BIOS 3 lets you restore a PC to working order — even when it won't boot!

EZ FLASH 3
Update the latest BIOS via the internet or from within the system BIOS.

GAMEFIRST IV
TEAM UP TO BANISH LAG
GameFirst IV optimizes network traffic for faster, lag-free online gaming — and now we've added Multi-Gate Teaming to team all your networks for maximum bandwidth and the smoothest-ever gameplay. You'll also enjoy all-new Intelligent mode, which automatically compiles a database by parsing new app data to ensure that every game is optimized for the best performance.

OVERWOLF
STAY IN THE GAME
Overwolf is a clever, unobtrusive overlay that lets you browse the internet, email, IM, and stream or record gameplay – all while you're in the game. Color-matched ROG skins that display your status as a member of an elite pack are also available for download from the Overwolf App Store.

ROG CLONE DRIVE
IMAGE YOUR DRIVES, THE SMART WAY
All-new ROG Clone Drive is the smart, convenient cloning solution that quickly and efficiently replicates hard drives or SSDs. Clone Drive is so smart that it can clone one drive to two target drives at the same time, or image any file from your disk at breakneck speeds.

Beyond VR ready
ROG Strix B250F Gaming isn't just VR Ready — it goes way beyond! The ASUS ROG Beyond VR Ready marque means that ROG Strix B250F Gaming has been tested with loads of class-leading components to ensure that your productivity, gaming and entertainment needs are tuned for maximum performance after you've taken off the headset. ASUS Beyond VR Ready opens up a new way to configure and build your dream system with total confidence.

The power of Intel

From now, you will see the stock status on the product pages, in the categories and the search for
Shipping method
Estimated delivery
Price